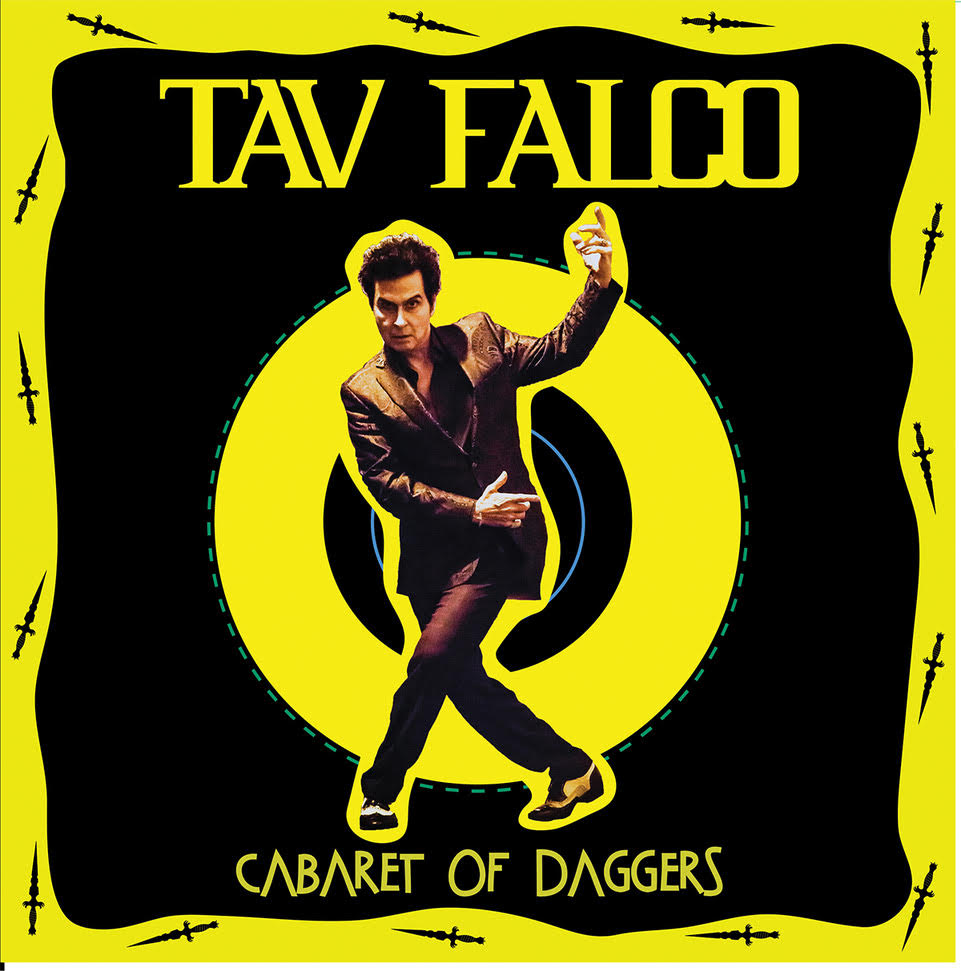 AMIDST CRUSHED VELVET DRAPES AND THE GLOW OF BURNING CANDLES, THE STAGE IS SET FOR TAV FALCO’S CABARET OF DAGGERS

FEATURING NEW ORIGINALS AND SELECTIONS FROM 80 YEARS OF THE GREAT AMERICAN SONGBOOK, FALCO’S LATEST ALBUM FIND THE ARKANSAS TRAVELER AND HIS EMINENT TEAM OF ITALIAN ACCOMPANISTS EXPLORING HIS MOST CHALLENGING SELECTIONS TO DATE WHILE WEIGHING IN ON « THE PUPPET HEAD ORANGUTAN OF MALIGNANT RAGE »

FOR IMMEDIATE RELEASE / October 10, 2018 – Nearly four decades into his musical career, Tav Falco is poised to take centerstage with the provocative and timely Cabaret of Daggers. Recorded earlier this year in Rome, the album features newly-penned Falco originals which question the sanity of our troubled times, alongside carefully-curated selections from over 80 years of the Great American Songbook. Released by ORG Music, Cabaret of Daggers will initially be available as a limited edition, yellow colored vinyl pressing of 750 copies worldwide, exclusively for Record Store Day, Black Friday, November 23. The standard black vinyl edition and digital download follow on November 30. Black vinyl and download can be purchased at https://www.orgmusic.com.

A fixture on the international music scene since 1981, Falco has been described by The New York Times as “A singer, guitarist and researcher of musical arcana who hasn’t let his increasingly technical expertise and idiomatic mastery compromise the clarity of his vision.”

Raised in rural Arkansas and a key figure on the Memphis music scene of the 1970s and ‘80s, Falco was a frequent visitor to Europe as the frontman for his storied and long-running band, Panther Burns. He eventually fell in love with the Old World splendor of Vienna, and has been a resident of the Austrian capital since the late 1990s. Falco pays homage to his adopted city on “Red Vienna,” co-written with Cabaret of Daggers’ producer/guitarist, Mario Monterosso. Benefitting from a rich musical palette which evokes Django Reinhardt, Italian neorealism cinema, and a nursery rhyme cadence, “Red Vienna” recounts the history of fascism’s rise in Italy. Franz Ferdinand, Leon Trotsky, Sigmund Freund and Gustav Klimt all find their way into the lyric, and the dreamy, surreal song also acts as a warning to modern-day listeners as we witness, on a daily basis, the rise of similar authoritarian politicking across the world stage.

While “Red Vienna” addresses autocratic regimes from a historical perspective, “New World Order Blues” brings us bang up to date. A crowd favorite when premiered at this spring’s Beale Street Music Festival in Memphis, the thumping, strutting “New World Order Blues” takes thinly-disguised aim at our current instigator of global chaos. “Dumb yourself down, or get out of town is the current message from the U.S. government,” says Falco. “Is America going to sell out its ethical dignity for a pseudo bubble economy predicated on scorched earth policy? Moral bankruptcy and malignant rage reign down from the highest echelons, while honest Americans are either duped or forced off the grid.”

Lodged at the fervent, beating heart of Cabaret of Daggers are a pair of legendary jazz standards which underscore the cabaret theme of the album’s title. Falco’s interpretation of the Chet Baker classic “Born to Be Blue” (written in 1946 by Mel Tormé and Robert Wells), fits the singer like a velvet glove. He pours his heart and soul into this outsider classic; the resonance of experience is palpable. Descending into an even darker shade of blue, Falco also revisits “Strange Fruit,” undeniably the 20th century’s most harrowing anthem of doom. “Billie Holiday is the mistress of ‘Strange Fruit,’ and always will be,” says Falco. “Yet, after years of this dirge lurking in the background of my thoughts, I knew that one day I would be ready for it. Ready to sing it — not in a conscious way, but in an unconscious way. It is the supreme American song of dissent.”

If you’re at all familiar with Tav Falco’s Panther Burns, the band’s reputation as a world class rock & blues party revue looms large. Falco’s current lineup of the group, which also backs him on this solo effort, is comprised entirely of Italian musicians sympatico with the dynamic Panther Burns legacy. Mario Monterosso, who has been at Falco’s side since his 2014 solo album Command Performance, produced the album, provided arrangements, and plays the lion’s share of guitar. Francesco D’Agnolo dazzles on acoustic piano, Hammond organ, and accordion. The nuanced rhythm section is provided by Giuseppe Sangirardi on electric bass and Riccardo Colasante on drums and percussion.

“Strange (Libertango)” is a tour de force which finds the band locked in a groove, certain to thrill anyone intimate with Astor Piazzolla’s original or Grace Jones’ reworking of the track as “I’ve Seen That Face Before (Libertango).” Album opener “Nobody’s Baby” introduces the evocative world of Cabaret of Daggers with a similar tango rhythm. Falco’s hip-shakin’ interpretation of the Jaynetts’ 1963 girl group classic “Sally Go ‘Round the Roses” is so uproarious it could have featured in the Corny Collins Show dance contest in John Waters’ Hairspray. Fans of David Lynch will swoon at the strains of Santo & Johnny Farina’s 1959 chart-topping instrumental, “Sleep Walk.” The proceedings take a bluesy turn with the haunting, Depression-era “Sugar Mama Blues” and the more recent Jolie Holland composition, “Old Fashioned Morphine.” “Master of Chaos Theme” closes the LP with a moody instrumental tribute to the French crime hero Fantômas. The digital download (also free with LPs purchased directly at http://www.orgmusic.com) includes a bonus track, “The World We Knew,” a new recording of a track which originally featured on Panther Burns’ 1987 album of the same name.